These are my oft-requested diagrams of trypanosomatid parasites. They're heavily inspired by the amazing illustrations of trypanosomatids by Keith Vickerman, like this classic, though with a more modern twist.
Both aim to be fully accurate diagrams, targeting a specialist text book or review paper level. They're drawn based on on lots of papers, both by others and by me, plus many hours on electron microscopes looking at them! They are slightly 'cartoony' though, exaggerating the size of some of the organelles/structures for clarity. 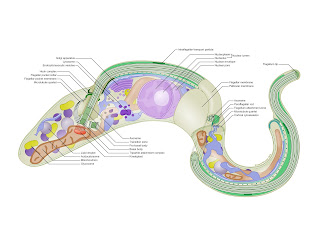 Trypanosoma brucei procyclic trypomastigote form - as found in the tsetse fly midgut. This diagram is featured in my annual review with Keith Gull and Jack Sunter: Coordination of the Cell Cycle in Trypanosomes 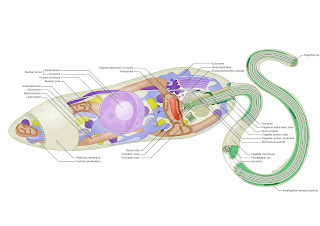 Leishmania mexicana procyclic promastigote form - as found in the sandfly midgut. Drawn in the same style as T. brucei, but not published.
Trypanosomatid parasites are wonderfully structured and intrinsically beautiful cells. They've been the subject of many of my illustrations over the years, you'll find them around, and give a track record of my illustration skill... for better or for worse.
Please ask before using these - they represent a big investment of time - but they are made to be used and belong in lecture slides! Drop me a message if you need really high resolution versions, vector versions (pdf/svg), etc.
No comments:
Email ThisBlogThis!Share to TwitterShare to FacebookShare to Pinterest 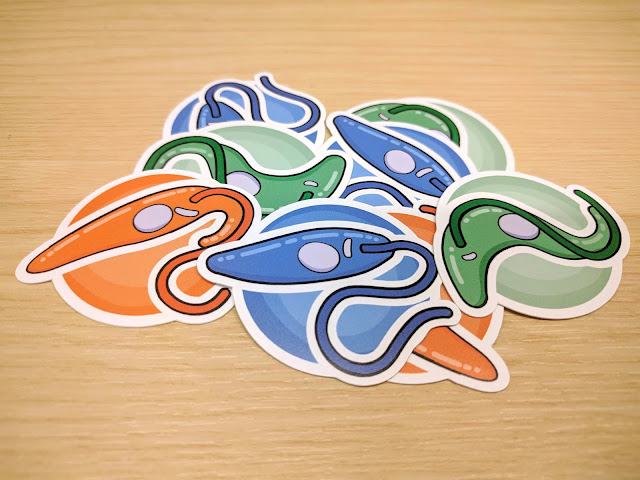 It's been a busy year starting my lab... But in more important news, T. brucei, T. cruzi and Leishmania stickers!

How does a cell swim fowards?

“Why are they swimming backwards?” This is one of the most common questions I get asked whenever I show a video of Leishmania parasites swimming.

If you look at Leishmana with a high speed video it's easy to see they tend to swim 'tail-first', with the flagellum sticking forward into the direction of travel. Sperm, probably the best-known swimming cells, do the opposite, and swim 'head-first'. 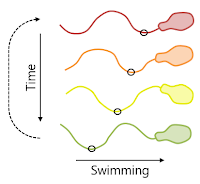 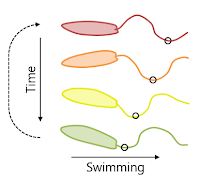 Sperm on the left, Leishmania on the right

Of course, if you could ask the Leishmania, they'd say that they're swimming forwards and it's the sperm which are swimming backwards. This raises the question of how does a swimming cell decide which direction it should swim? Which direction is forwards? 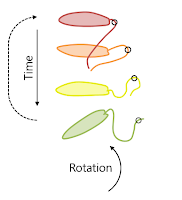 This let us use genetic tools to try to break one direction of flagellum wave without affecting the other and tease apart how the flagellum movement might be chosen by the cell. To cut a long story short, we found differences in the motor proteins between the base and tip which seem responsible. Interestingly, similar differences turn up in many organisms, including human sperm, suggesting it might be a general pmechanism. You can read all about this in our recent paper: At the PNAS website or as a PDF.

How happy are your HeLa cells? 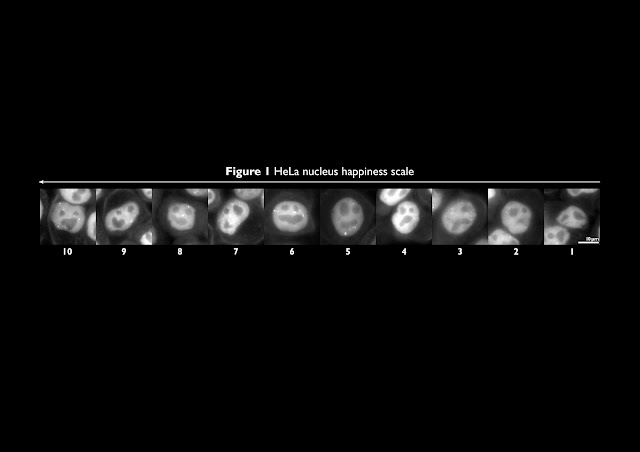 Figure 1. HeLa cell nucleus happiness scale. HeLa cells expressing FUS eGFP were asked how they felt. The morphology of the nucleus and nucleolus, visible via FUS eGFP localisation, was used to infer happiness. The response was ranked by two independent experts, and used to build a HeLa happiness scale.
No comments:
Email ThisBlogThis!Share to TwitterShare to FacebookShare to Pinterest 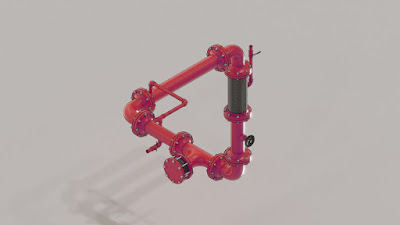 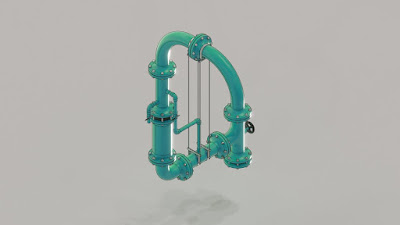 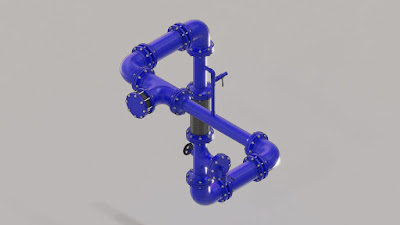 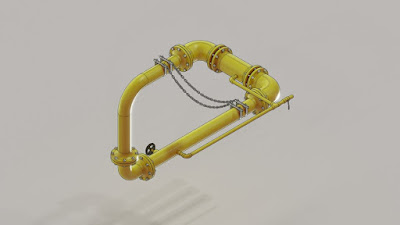 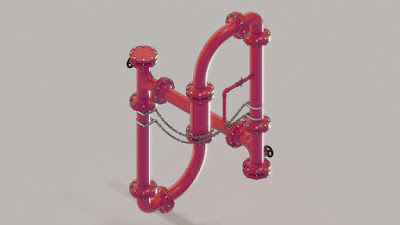 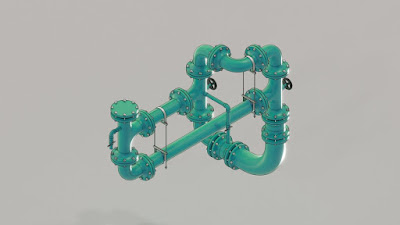 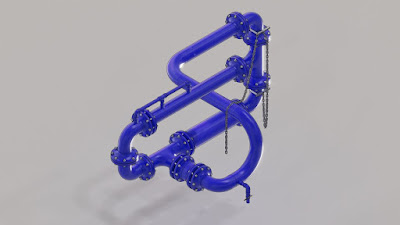 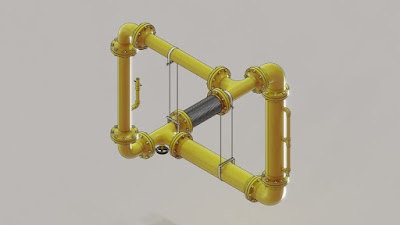 No comments:
Email ThisBlogThis!Share to TwitterShare to FacebookShare to Pinterest

How to be a parasite

For an organism to become a parasite it has to adapt to live in a host. This might mean it needs to grow faster, invade cells or tissues, or avoid being killed by the immune system. It can also 'forget' how to live outside a host. It can forget how to search for food, how to survive the cold, and how to avoid drying out.

We can learn how parasites adapt to infect hosts by looking at the nearest free living relatives. What had the parasite lost relative to the free living cousin, because it just doesn't need it to survive in a host? Or vice versa, what has it kept because it's useful for infecting a host?

I've looked at this question for trypanosomatid parasites. They are protozoan (single cell) parasites, like the malaria parasite, and cause several deadly tropical diseases.

A few hundreds of millions of years ago, they weren't parasites at all. The ancestors of these parasites were free living, probably swimming in ponds, lakes and seas. Then, at some point, some evolved the ability to infect insects.

My most recent paper is all about this. Julius Lukeš has discovered a species of trypanosomatid that only infects insects, and looks like it hasn't changed much from the first ancestor ever to infect insects. 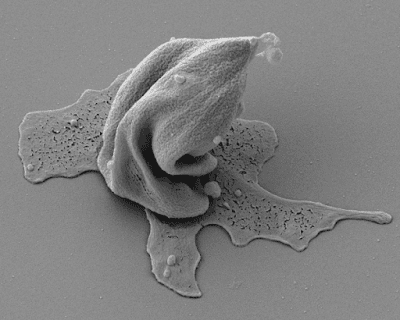 With Tomáš and Eva, we looked at what this species tells us about how these parasites adapted to infect flies: How does the cell grow, adapts its shape, and stick to surfaces? How does its internal organisation adjust to allow these changes? How does its metabolism change for different energy sources? And, how has the genome, which encodes the proteins that drive these functions, changed to achieve this? 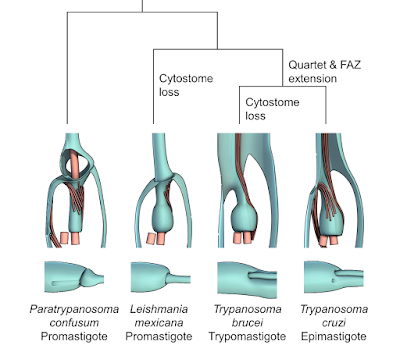 Using this information, we could then get insights into what is important for human infective parasites. What aspects of shape, structure and metabolism adaptations have they 'forgotten'? And which have they kept? The ones they have kept are the ones important for infecting, and killing, people.

Want to read more? You can get a copy of the paper from my website: richardwheeler.net

One hundred years ago Asa Schaeffer blindfolded his friend and challenged him to walk in a straight line. He did three loops of a spiral, before tripping over a tree stump. This wasn't a cruel prank, it was an experiment, and all people are surprisingly bad at this simple challenge. 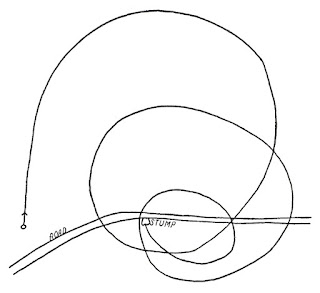 People need some external reference point, a distant hill, the sun, or even the direction of shadows, to manage a straight line. Why they drift into circles without a reference isn't clear. Is it asymmetric leg strength? A handedness bias? Or some psychological miss-correction? What is clear is that it is a universal problem.

Navigation without reference points is always difficult. This is why spin stabilisation is widely used to stop flying objects, from bullets to rugby balls, curving off course in the air. Even advanced tools like inertial navigation systems, which use dead reckoning from measuring acceleration, always drift off course.

So how about swimming cells? Many swimming cells and microorganisms have the ability to swim in a straight line. Most have no ability to look at a reference point, they can only perceive the liquid they are in immediate contact with. They are also typically top small to be affected by gravity, so have no way of using up or down for reference. They are essentially blind.

The trick for straight line swimming in cells seems to be some kind of spin stabilisation. Way back in 1901, H.S. Jennings noted that many microorganisms spin as they swim, and thought this could be a spin stabilisation somewhat like a spinning bullet. The problem is it can't be. Rugby balls, bullets and spacecraft use spin stabilisation which depends on rotational inertia to keep them spinning and stable, similar to a spinning top. If you made a top that was the size of a cell, and span it in water, it would stop spinning immediately; there is too much friction. The American Naturalist, 35(413):369-379

It turns out the mechanism is just geometry. A person walking is a back-forward/left-right, a 2D, situation. If you curve the walking path it makes it into a looping circle. For a cell swimming there is another direction to think about; in 3D there are two ways to curve the swimming path. The first which curls the path into a circle, and a second which twists the circle to elongate it into a helix-shaped path. Elongate the helix far enough and it turns into a straight line, with the cell rotating as it swims. 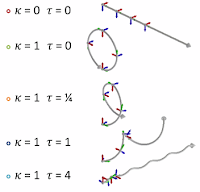 The interesting property of the helical swimming paths is their stability. If a cell deliberately twists its swimming path into a helix then small asymmetries (the cellular equivalent of having one leg stronger than the other) won't bend the swimming path into a circle. Instead it just slightly alters the shape of the helix. It can ensure the cell swims in a dead straight line.

My latest paper is all about how cells manage straight line swimming, looking at trypanosome and Leishmania human parasites. Each aspect of swimming has been looked at before, but I believe has never previously been put together as a full story: from mutants with altered cell shape (to add more or less twist), measuring the effect on swimming, and matching this to simulation of how cells achieve their straight line swimming. PLOS Computational Biology, DOI: 10.1371/journal.pcbi.1005353

There are still big unanswered questions though: Why do parasites need to swim in a straight line? And what are they swimming towards? This is an area of active research, with several major trypanosome research groups (especially Kent Hill and Markus Engstler) interested in addressing these questions.
1 comment:
Email ThisBlogThis!Share to TwitterShare to FacebookShare to Pinterest
Labels: Leishmania, paper, science, trypanosome
Older Posts Home
Subscribe to: Posts (Atom)